Last night I made my Chicken Pot Pie.    What I ended up with was a scary halloween version.

This is the pie when it came out of the oven.  All nice and normal looking. 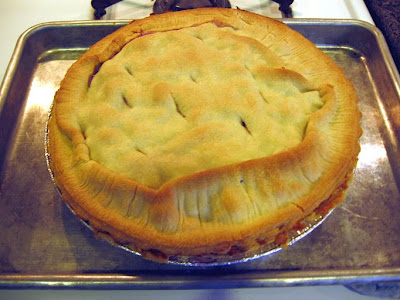 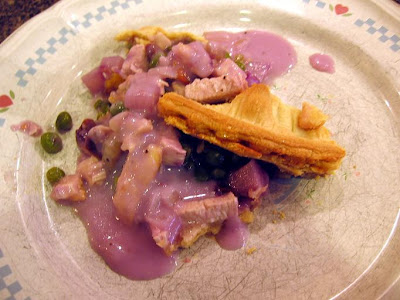 Scary looking.
This is why it happened.  Remember my Carrots?
It made a very lovely purple colored broth.  And I thought it nice how the potatoes really
soked up the color as well. 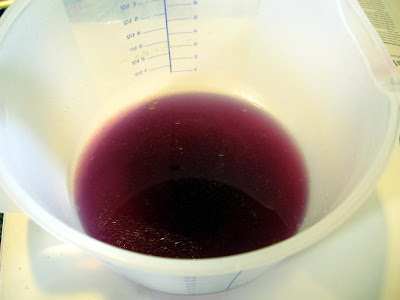 I was very pleased that everyone ate it, without really complaining or grossing out.  I thought it was quite fun.  I even had company for dinner.
Posted by Nicky at 8:56 AM 4 comments:

You know when they tell you to get all your ingredients out and ready to go?  I am the one they are talking too.  It seems that I often get through part of a recipe only to realize I don't have a certain ingredient.  This time it turned out I didn't have a lot.  Actually I knew some of the stuff that I didn't have right up front and it was the reason I made this in the first place, kind of a get rid of stuff in the fridge.  But mostly because it sounded good.

It started with the left over whip cream in the fridge, way back from my sons cake.  You think I could figure out better things for whipping cream than ice cream don't you.  I'm sure you could.  Well I had copied this recipe from some magazine and it was just sitting on the top of my notebook calling to me.

Let's back up and start with the recipe shall we?

I'm  sure it said something like combine all ingredients and freeze according to manufactures directions.


Nowhere does it say whip cream.  But I had thought, I'll just combine the rest of this whipped cream with some milk and it will be like half and half.  - Ya following me here?   Next - Pudding.  Yea! I actually had some.  This hasn't always been the case.  Last time I needed something with pudding I ended up making a mix which would have been a cooked pudding.  It wasn't so bad but I think it missed the "instant" part, it never really set up like it should have.  Anyway,  I put in the pudding.  Then I go down to the storage room to find some Sweetened condensed milk.  Turns out I have plenty of Condensed milk, probably left over from all that fudge I was going to make last Christmas, but no Sweetened Condensed milk.   NO PROBLEM!  I know a way to make SCM from Powdered milk.  So I mix up that concoction (I'll share later) and put it in with the other stuff, I beat it up for a while.  The powdered milk and sugar haven't really had a chance to really dissolve yet though.  Mint.  I have a large patch of mint in the backyard, peppermint and spearmint, although they taste very much the same.  I remember this, just after I already put a half a teaspoon of extract in.  (I think 2 teas. is too much)  And I'm thinking the best way to impart the mint flavor would probably have been to steep the mint leaves in the milk for a bit.  Too late for that I guess, but, why not?  I go grab some, throw it in the pot and just add a bit of milk.  After it simmers for a bit I tasted it, not what I was hoping for taste wise, but I chalked it up to the milk and poured most of it in the bowl.

After this I whisk it up for a while and then put the bowl in the freezer.  I have an ice cream freezer.  The kind that is big and takes a couple bags of ice and rock salt and it's noisy and takes a long time...    So I just decide to go straight to the freezer.  I've done it before.  I definitely do not claim to be a great ice cream maker.  I will leave that title to my SIL and neighbor.  Anyway, I take it out about every 30-60 min. and give it a beating with the mixer, scraping all the frozen parts off the wall.    When it had reached milk shake consistency I prepared the chocolate chips.   I know from experience that to just toss chocolate chips in ice cream just makes rock hard chocolate chips.  So instead I put about 1/3 cup chips in the microwave and soften them up with about a teas. of shortening.  I put it in the freezer to harden then I take the vegetable peeler to it and make a bunch of little chocolate shavings.   I stir these into the mix then let it just freeze up. 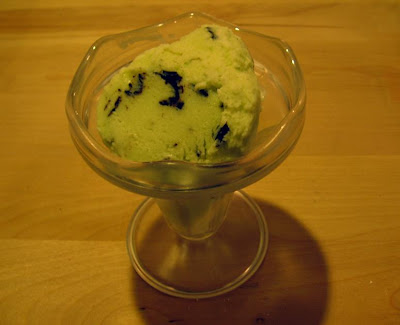 Guess what?  It actually turned out very well.   It was very good in fact.  My husband commented that he could tell it had powdered milk but I thought it was hard to tell.  The chocolate worked out perfect, stayed softer and looked better in the scoops than regular chips would have.   Everyone liked it except age6.  He wouldn't even try it even though mint chocolate chip is one of his favorite ice cream flavors.  Because, he said "well you made it right?"    I knew he meant that he just thought it wouldn't be as good as store bought and he is kinda picky about desserts anyway but it was hard not to take that comment a little further.    I FORCED him to take a bite and he did so with his usual forced bite yucky-face.  I don't care what the food is, when you make that face and taste anything it's going to taste bad.   Although he didn't say it tasted bad, he just said it didn't taste the same.  My daughter said it tasted just like regular though.  I preferred it in soft serve state.  Probably for several reasons it was too crystally when totally frozen. 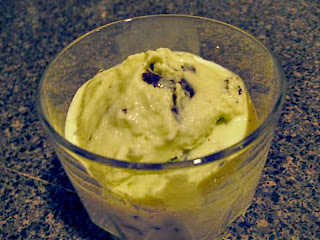 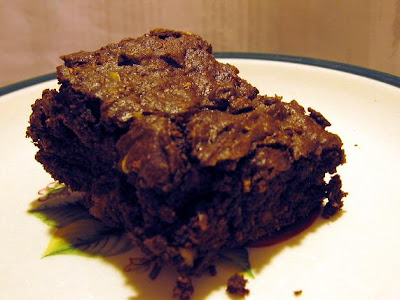 I showed you the cucumbers that took over in my garden before.  We couldn't keep up with them this year.  We just weren't in a cucumber mood and rarely would just eat them.  I love cucumber but I just wasn't into it this year.    I had so much and hated throwing it out every week.  Even  attempts at giving it away to neighbors failed.  I mean it's not like it was Zucchini or anything.    OR WAS IT?
Long ago my sister made me a cucumber cake for my birthday.  I'm sure if I lived with my sister I would be much better off health wise than I am by myself.   We played a game the other night, we both got the same question at separate times.  We simply had to answer which word(s) we felt right, for whatever reason.  The words?  Healthy or Junk Food.  Me? - Junk Food.  Her? - Healthy.  I can't help it, I want to eat healthy and try but I still like Junk Food.  And I feel quite junky lately or that I haven't been eating too well so I answered junk food.  Although in a sense I don't think anyone would look in my cupboard and find a lot of junk food, I don't have potato chips or packages of cookies etc.   But two helpings of fresh apple crisp seem junkier than not.
So on too the brownies.    I thought, of course! I could use the cucumber like zucchini and add it to the brownies.  It's got to be better than non vegetable added brownies right?  So I did.  I took a regular zucchini brownie recipe and substituted cucumber.  The cucumber was more watery so I didn't put quite as much in.   It tasted fine, almost too moist but the family didn't care.  It was chocolate cake after all.  And the kids all wanted seconds.  I have to feel almost Bill Cosby-ish about it.  'But it's got milk and eggs and. . . Cucumber!  Mom is great!  Gives them the chocolate cake!'   Wait, no it doesn't have milk or eggs,  and no, we did not eat it for breakfast.
So here is the recipe I used but I'm leaving it as zucchini, just substitute if you feel like experimenting. Remember to de-seed the vegetable of choice before grating.  Now that I think about it I got this recipe from one of my other sisters.
Zucchini Brownies
1 1/2 cups sugar
1/2 cup oil
1 teas. salt
1 1/2 teas. baking soda
2 teas. vanilla
1/3 cup cocoa
2 cups grated zucchini
2 cups flour
1/2 cup chopped nuts

Mix the 'wet' ingredients first, then add the 'dry' ingredients.   Bake 375º for 25-30 minutes.
I know, not very specific directions.  Sorry, when I jot down recipes I only include ingredients and baking degree.  Sometimes I remember to put a baking time.   Also I used extra cocoa.  at least 1/2 cup total.
Next, I might tackle another cake my sister made me for a different birthday.
Posted by Nicky at 7:55 AM 3 comments: 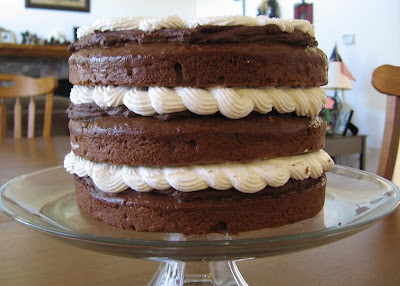 This is one of my favorite cakes to make.  This time it was for my son's Birthday party. 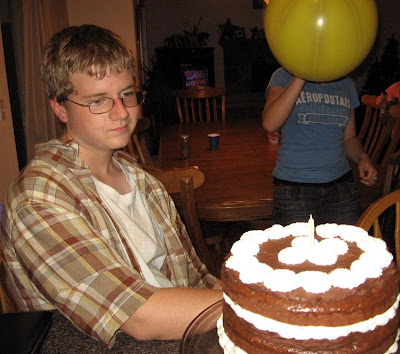 He doesn't look too excited about it does he?  Actually I just caught him at a bad moment I guess.  This was his first Teenager party.  It was quite fun to have all his friends over.  Very good bunch of kids.

He told me me he wanted a cake with a bunch of layers.  He mentioned Ice cream cake, but I didn't have the time to fuss nor the freezer space to store such a tall order.    His cake taste is improving.  We don't do parties every year at our house, but usually every other year.   For his last birthday party he was very into Cryptids.  His favorite being the Yeti.    And he wanted a Yeti cake complete with snow mountains.  This may not be your idea of the Abominable Snowman but I looked it up, let me tell you, the actual Yeti is reddish brown in color, not white.
Let's refresh our memories.

I'm glad he picked a more grown up cake this year.

The cake itself is just chocolate.  You can use whatever you like,  My favorite recipe takes quite a lot of time but for this I didn't have that time and used a doctored cake mix.  Gasp!  yup.  It was actually an old White Cake mix that I added cocoa, pudding, and sour cream too.  That was the mix that needed to be used because it was out of date.     The filling is a layer of Chocolate ganache and a Layer of Stabilized Whipped cream. So simple and yet sooo good.  Careful when cutting because it needs to be refrigerated (for the cream) which makes the ganache hard and thus hard to cut.
Posted by Nicky at 8:57 AM 3 comments: