Crop circles - On my Watermelon?

Today I finally went out to pick some long overdue to be picked watermelons.    We haven't been able to keep up with all the canteloupe that all got ripe at the same time so the watermelons had to wait.  Pretty much anything left in the garden has just gone to seed or whatever.  Serrano's anyone?

Anyway, this is what we found on a couple of the melons we brought in.   Perfect target circles. 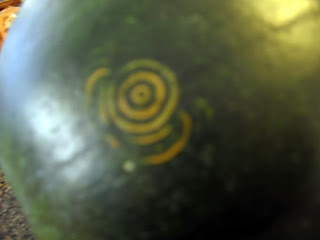 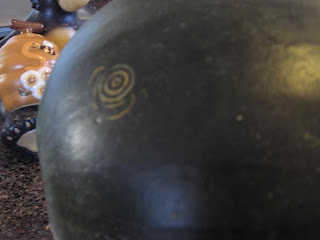 I couldn't get a good picture of this one, no matter what I tried. 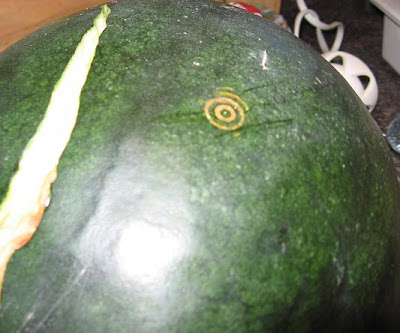 My son droped this one on the way in the house.

The only information I could find was from the Extension at Purdue:

This disorder is marked by very striking target-like patterns that occur on the watermelon rind surface. The target spots appear in distinct clusters and can be as large as 1 inch in diameter (Figure 81). The target rings have a corky texture and are slightly raised (1/16 inch) from the fruit surface. No decay was associated with symptomatic fruit. Several attempts at identifying pathogenic bacteria or viruses were not successful. Fruit with the target cluster apparently occur very infrequently. Incidence and distribution in affected fields suggest that it was not responsible for any economic consequences.
http://www.extension.purdue.edu/extmedia/BP/BP-44.html"

While I'm at it, I picked one of the few purple carrots that actually grew this year. 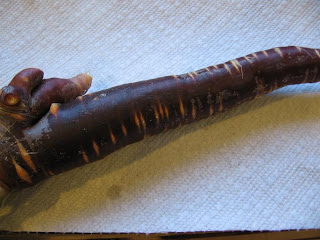 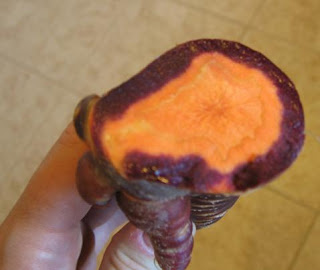 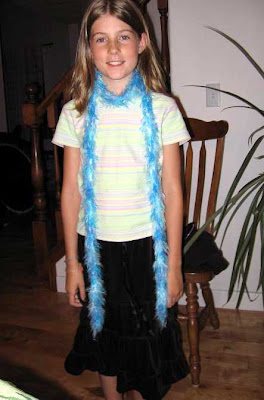 My daughter made this fun scarf using the idea from finger weaving.  I decided we needed a loom to make a long thing easier and heaven forbid that I buy such a thing.  I drilled some holes in a piece of leftover wood and chopped a dowel.  Ok, my carpentry skills are lacking, I know.  But the thing did the job.  She was able to complete this scarf in a couple of hours and is making more. 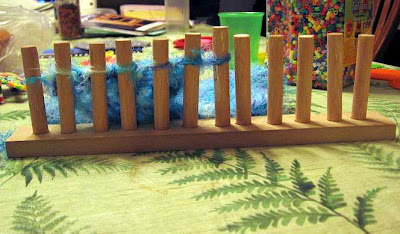 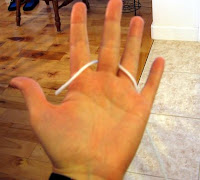 To finger weave, simply wind the yarn around your fingers of your not dominate hand, front and back and then back to the first, then one more time forward and back so you see two threads on each finger. 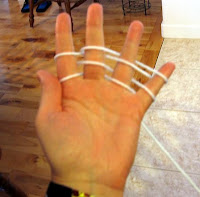 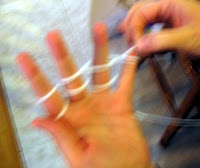 Lift the bottom thread over the top thread and over your finger. Do this on all fingers.  Then repeat the winding thread over the fingers until you have two threads again and lift etc.... 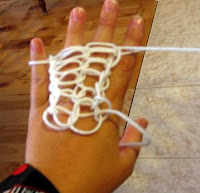 View from the table 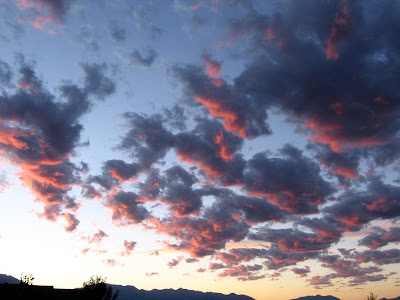 It's been a while since I have tried (since I have no real skillz in the area) to take a nice picture out the side window by my table.  This was a very nice morning. What brought me to the window was the sounds of the Marching Band at the nearby high school wafting across the fields.  I went to the window to let in the sound of the drums and some fresh air.

If you could see down on the field just to the left of the photo you would also be able to see a herd of prong horn who are enjoying a nice breakfast of hay.  Or at least they like to lie in the cool hay.  When they do you almost can't see them, especially when it's tall.  I can't see them from my window because of the house behind mine, but when I drove by 20 min. later they were there.  It's been one of their favorite fields this summer.

Here are a few of the prong horns in a view looking back towards my neighborhood.   My neighbor happened to post some pictures the same day as I, so I borrowed one from her. 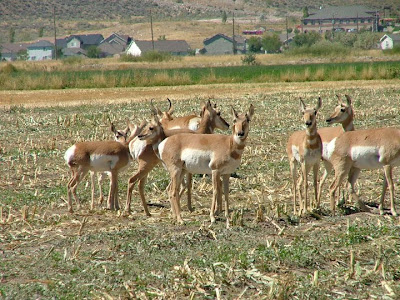 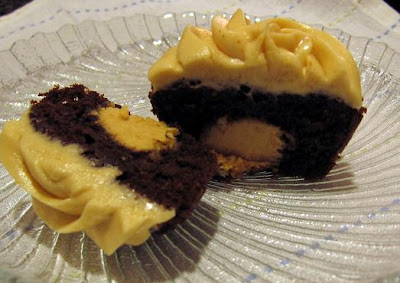 Oh Yeah!
These cupcakes are so yummy.   It is one of those recipes where I hate to give up my secrets.  But I will share this time.  I made them for my daughters 'party.' That thing they do about every other week anyway with her two best friends but I decided to make it a little more special. It was the last late night of the summer.  I hope she appreciated it.  It was a mystery theme. First they had pizza, then they had to solve 4 parts of a mystery. They were given clues throughout the night and in between they played the Whodunit game and tried to watch Nancy Drew, but didn't get very far with the movie.

Half of the girls fun is making invitations and decorations all the days leading up to their evening event.  They taped finger prints all around the house and other cut outs and paper chains.  Sometimes they even plan enough to dress alike, but this time they didn't.

Really, I think I may have had as much fun coming up with all the  puzzles and clues as they did solving them.  the ranged from simple (or hard) puzzles to having to fingerprint everyone in the whole house.  Each clue took them almost 20-30 minutes to solve.  I thought it wouldn't take so long.   It ended up not being so late of a night, one girl had to go home early. 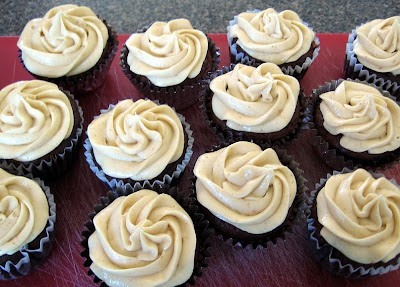 As for the cupcakes, Yummm.  The cupcake was a regular enough chocolate but the truffle inside made them so much more awesome. I think I may have eaten one or two of the truffles all by themselves before putting the rest into the cupcakes.   The frosting was so yummy and I could just sit and eat it alone also.  Bad me!


Place white chocolate in medium microwave-safe bowl. Microwave on medium just until chocolate is soft; stir until smooth. Whisk in ¼ cup peanut butter until smooth.
Refrigerate 20 to 30 minutes or until firm. Using 1 tablespoon each, roll chocolate mixture into 12 (1-inch) balls; place on waxed paper-lined plate. Roll each ball in cocoa powder to coat completely. Freeze on lined plate 1 to 3 hours or until frozen solid. (Truffles can be frozen overnight.)

Heat oven to 350 degrees F. Line 12 muffin cups with cupcake liners; spray bottom of liners with nonstick cooking spray. Sift flour, sugar, ½ cup cocoa powder, baking soda and salt into medium bowl; combine.
Place buttermilk, eggs and vanilla into a large mixing bowl; beat at medium speed until blended. Reduce speed to medium-low; slowly beat in flour mixture. Add melted butter. Increase speed to medium-high; beat 2 minutes.  Divide batter equally among muffin cups, filling each about three-fourths full.  (I thought this might be too much but after they cooled they shrunk a bit.)

Gently drop frozen truffle into center of each batter-filled cup. Do not push truffle into batter, it will sink during baking.  (I put mine in still frozen, I wonder if they had been thawed a bit if they wouldn't melt into the cake a bit?)
Bake 30 to 35 minutes or until toothpicks inserted in centers come out clean. Cool in pan on wire rack 10 minutes. Remove cupcakes from pan; cool completely.

These cupcakes would do well with a chocolate or ganache frosting also.
Posted by Nicky at 5:09 PM 11 comments:

This year I planted a different variety of Cucumber. I got tired of the other cuc's being bitter half the time. So my SIL told me about a Japanese cucumber she grew and I decided to try it. When I went to the store they told me she probably meant an Armenian Cucumber.   These things are big.  The two below are actually the smaller ones.  I took pictures of my first cucumbers.  But I had one almost 24 inches last week. 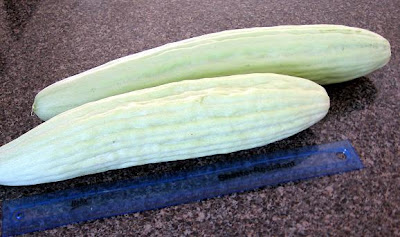 My kids sometimes eat cucumbers without complaint.  And I usually love them with vinegar and salt give or take something a little extra.  But this year I just was not into the cucumber.   My husband says they tasted like they were all rind.  I liked them ok but they seemed to have more seeds packed in them per inch.  One recipe I managed to get in with some of my first tomatoes, which did not do so well this year, along with the rest of my garden, is a simple cucumber and tomato salad. 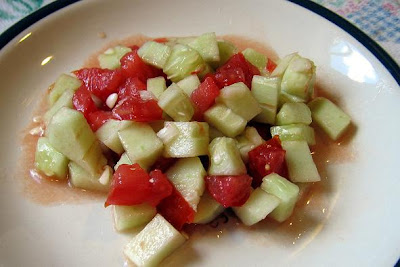 I got the recipe from a neighbor and I like that it is simple and just about what I normally do with a cucumber, only with the more goodness of a tomato added.  With these cucumbers it makes a ton!  when it said 2-3 cucumbers, I used only one.

Not to specific there so go with what looks right to you.  Less onion, more tomato, etc.  Dice cuc's and tomatoes and onion.  Combine vegis in bowl and sprinkle with salt.  Add oil, vinegar, and water to taste.  It's going to depend on how much of the vegies you used and how tart etc you want it to be.  I used Olive Oil and not very much of it and I left the water out altogether, there is enough juice from the tomatoes for me.

Now I think I may need to make some more of this for lunch today.  If I hurry and get the dishes done I can whip some up and it can marinate in time for lunch.
Posted by Nicky at 8:05 AM 1 comment: 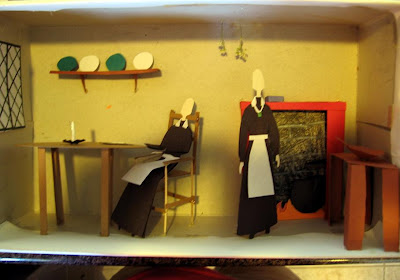 This is the diorama my daughter made for a book report over a year ago.   It was one of my favorite books when I was younger (you know, out of like a thousand favorites) and I helped her and thought she did such a good job.  We found it cleaning her room the other day and although I would like to keep it I know that is not reality and took a picture before we dumped it.
Posted by Nicky at 6:50 PM 6 comments:

Wow, this blogging thing is really hard to keep up with.  My hat's off to those of you who really keep up with it. 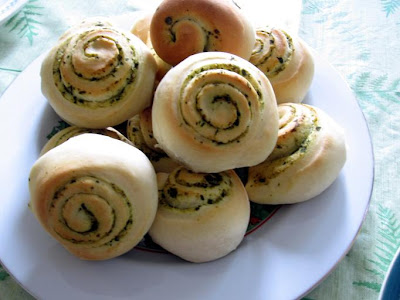 These simple rolls were made with the pesto I made a while ago.  Simply use your prefered bread dough and roll out, spread with desired amount of pesto, roll up then slice and bake.   And most importantly, eat.
Posted by Nicky at 9:41 AM 1 comment: