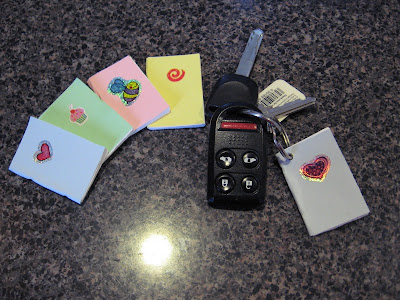 My daughter and I had fun making these tiny notebooks. They are quick and easy.  My daughter loves having notebooks to write stuff, from random stuff to diaries and stories.  So I thought she would enjoy this simple craft.

Then I start in the middle and do a half fold, and continue with halves until I get an accordion.

Take a quarter strip, cut long-ways again, from a colored 'cover' paper, (ours was thicker than regular printer paper but not as thick as card stock, I'm sure anything will work)  and measure around your book and cut to length.  You can't just take a quarter of the strip because the layers of the pages add length to the cover. 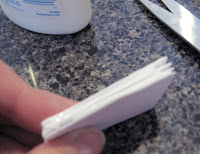 Hold the pages together and elmer glue the the edge/side with the most folds.

Then wrap the cover around, pressing on the spine to get it connected and wrap with a rubber band, cross of the band on the open side of the book.  This holds it together while the glue dries and put two little bind marks on the spine.


When dry enough, about an hour or two, remove rubber band and trim edges of book to cut off the folded edges (two sides) so it will allow all the pages to open. 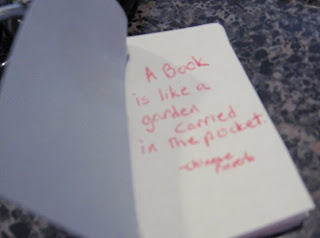 Last time I was visiting the little town in Maryland where my husbands parents grew up, or near there anyway, we stopped at what they call the bulk food store.  It's not what I picture as a bulk food store but that doesn't matter.  Its run by some Amish and they pre-package food into bags with their labels and weigh them on really old scales in a back room to get all the bags the same.  I know because I got to visit the little back room because as we went into the store they were spraying for bugs? and instead of turning the sprayer the gentleman doing the spraying sprayed the door and the sidewalk up to it just before and while I was on it.  So I had to touch the door to open it and of course get sprayed with the droplets still coming down.  So I asked if I could wash my hands and they directed me there.  It was HOURS before I could change clothes.  The others had already gotten inside while I settled the kids who didn't want to come in.

Anyway,  they were out of my favorite salve and the young girl didn't even know what I was talking about but I assured her I had bought it at that store only a few years previously.  They did have another by the same manufacturer that I also use so I just got that.  It's marvelous on burns.    BUT, I did spy a bag containing what they called Harvest Soup.  It was a blend of lentils and rice and wild rice and maybe a couple of other beans.    I bought it along with a few treats for the rest of the long ride.   it was a while before I tried it but I enjoyed it and my family seemed to like it too.

I've been trying to figure out how to recreate the mix and last time I was at Winco, AKA Bin-heaven, I spied a bin with almost the same mixture.  It wasn't quite the same but I grabbed some, along with a few extra french lentils and some wild rice mix.   I tossed them altogether and voila! I had my mix, although when this mix runs out I will cut down on the rice when I get some more.  Way too high on the ratio.   The mix has about 4 different kinds of lentils, yellow and green split peas, yellow and green dried peas, 2 kinds of wild rice, barley and regular rice, and a handful of misc. beans thrown in.  Like I said the rice is a bit too much and I will just get wild rice next time instead of a rice mix because the lentil part already had some rice in as well. 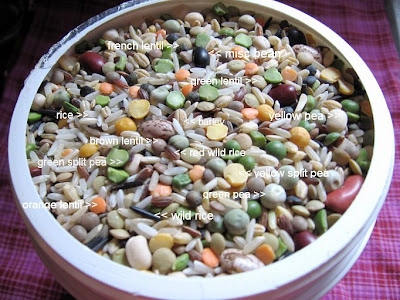 I put my old chicken carcass in the pot and boiled and picked it clean.  So for this time there wasn't really a lot of chicken, you could leave it out (because do you know how freaking awesome lentils are??!!) but do use a broth, either chicken or vegetable. Then I added enough water to fill the pot.  For the recipe I will try to estimate the amounts.  This is how I remembered to make the soup:
Harvest Soup
6 c. water
1/2 cup chopped onion
1 c. carrots diced

1/2 lb cooked chicken
about 1 1/2 cups lentil/rice mix
Place all in pot and simmer until carrots are tender and peas/lentils are slightly dissolved or whatever it is they do.  About an hour.  Once again, because that's the way I do it, add or subtract ingredients or amounts as you feel works for you.

I finally got some clay that you bake to dry.  My daughter has wanted some for years, usually after she does a craft somewhere else and wants to continue at home.  Then my son got a book from the library of crafts and almost all of them were for something made with the clay.
He chose to make a little pot and then so did my daughter. We opted for the coil version and these were their creations. After they were dry they painted them with simple acrylic paints. 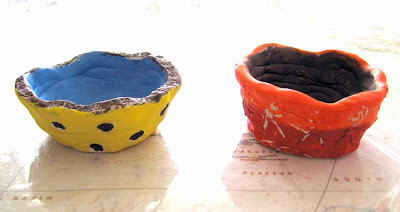