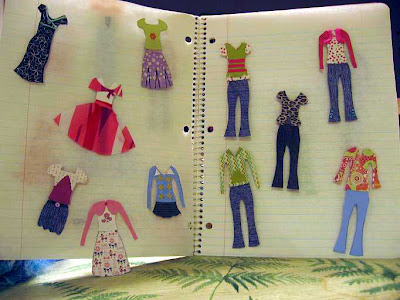 This is a few of the Fashions that my daughter comes up with using one of her fashion booklets.  It comes with templates to trace and she adds extras and things.    She puts them on velcro in this book. Also she and her friend made these modge podge frames out of tissue and poster board one day.
Posted by Nicky at 9:49 AM 4 comments: 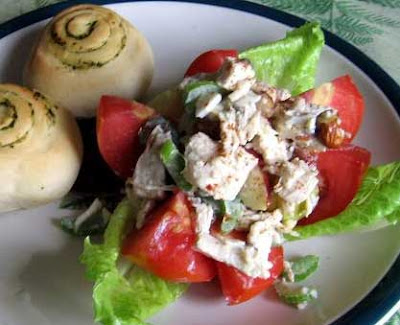 There are so many Chicken Salad recipes out there.  And everyone has their favorite I am sure.  I like most of them and don't really have a favorite.   This is the first chicken salad I ever made and it's the one I've stuck with.  I don't actually make it very often.  I think the last time was about 5 years ago.  And the time before that was probably for my one-time roommate's wedding shower.    I don't know why I don't make it that often.  I guess it doesn't strike me as a regular dinner meal, I don't host parties too often and I know my younger kids won't eat it.  My oldest surprised me however by having seconds.  I may have to start making it more often.

Combine all, chill.
Posted by Nicky at 9:20 AM No comments:

My neighborhood has a tradition of an Iron Chef competition.  About 50+ women divide up into about 8 teams and are given 1 hour to come up with a main dish and a dessert given a secret ingredient.  I believe it was H.O.'s brain child and I would like to congratulate her on it's 4th year of success even though she hasn't been in charge since about 2 years? ago.   Those in charge this year did a fine job.  Although I don't think the word got spread around as much and few people maybe didn't hear of it.  But that was due to a recent change in the leadership and hopefully next year that will get better.

This year the secret ingredient was Orange Juice.  Wow, the things that all the ladies in the competition came up with were fantastic.  I was on a wonderful team hosted by D.Y. and including S.R., R.B., C.L., J.S., and me.  Thankfully D.Y. had a large enough kitchen that we weren't crowded to death.    My team trusted me and went with the orange chicken I have already posted in my blog.  S.R. came up with the initial idea for the Orange pie we made and everyone contributed a bit to it.  We made two pies So I will try to remember the ingredients for just one.  Anyway we won 2nd place!  I won second place last year as well, with just two of us on my team.  Just saying.  I had a great time and got to know a few ladies a bit better.  Thanks you guys for a great night! 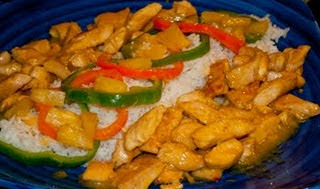 I think we all agreed after the smorgasbord that the pie ended up a little two sweet.  I am putting this recipe as I remember it with a slight adjustment that we sort of talked about as we ate everyone's wonderful concoctions.    I think it could still be improved upon but with an hour you don't have a lot of time to mess around. 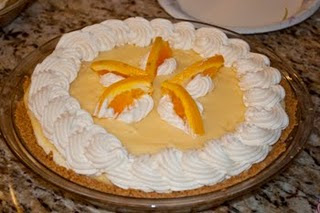 I'll update with pictures if and when I get them.  J.S. the lady who had the camera, and more skills in that dept. than me, is due in two weeks with her third child.  I'm impressed she gets done all the things she does but if nothing happens for a while I totally understand.
Posted by Nicky at 8:51 PM No comments:

While I haven't been too crafty this summer the kids have been busy.  Mostly my daughter, who almost daily says "Mom, I want to make something."   So I decided to show you some of the things they have been doing recently.  First my daughter got out the ever popular Perler Beads.  She saw this nifty box to make and did a few random designs besides.  Not all are pictured. 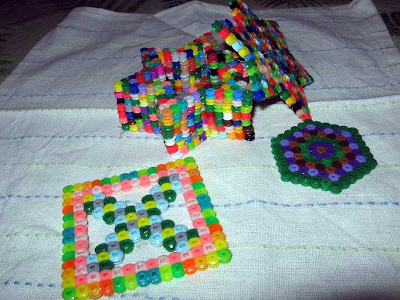 Age 6 found a Halloween craft he wanted to make.  I want you to know that we painted this thing at least 5 times.  It just did not want to cover up the cereal box.  I also couldn't find duct tape so we used painter tape. (which truly let us down in our basement.) 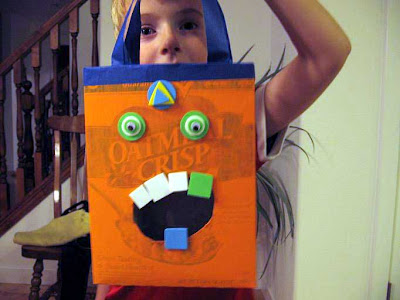 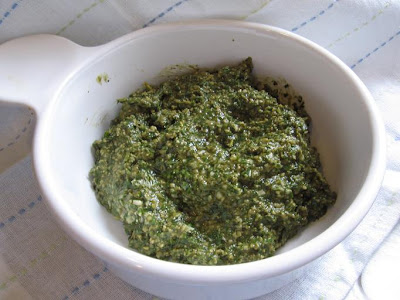 This year I finally got around to making pesto!  Yeah for me!  I always grow a big patch of fresh basil, but, I usually end up just drying it because I never seem to find the time, ambition, ingredients, etc. to actually follow through.  And most of it ends up just dying in the garden.  You can only use so much dried basil you know.

At my favorite Italian restaurant, which I don't think exists anymore, I always ordered the creamy pesto.  Yum.  I really need to learn to make that.  Ahh, this brings me back to my Italian roots.  ... What's that you say?  What Italian roots?  Well I will have you know that I have a brother and a brother-in-law and two seperate past boyfriends who all went on a mission to Sicily.  Also I used to have a next door neighbor who was actually an actual Italian and had lived in Italy and everything.  SO, um, ya.  Italian roots.

Once I found some pine nuts, or rather had the time to go find them.  I swear I never seem to do ANYTHING, and yet I never seem to have the time to do anything either.  If I could just figure out how to get my kids to do their whole fair share of the work.  Yesterday I had to get my son to do his 5 min. chore (age 13) 5 times because it was so blatantly not really clean.  He gave his usual shrug then later gets all mad because I've been bugging him all day.  SO DO IT RIGHT THE FIRST TIME!  Ok, getting a little off topic.  (It was never done right even after 5 times.)    Once I had the nuts I pounced on the basil the next morning and picked a whole basket full.  I actually had to go back out and pick a little more because after I packed my cups it wasn't enough. 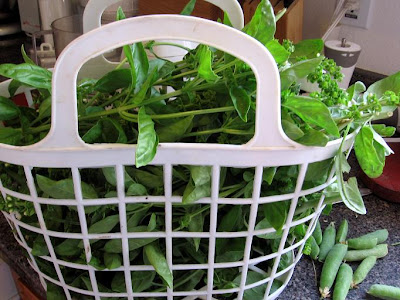 It is not hard to do.  I made mine in two batches then mixed the two batches together because my second was too salty.  This is a very basic recipe and can be changed to suit your taste.  Want more Parmesan? toss it in, less nuts?  More garlic?  Add and subtract as needed keeping things more or less to a basic.  I was never able to really get mine super smooth but oh well.  My house smelled heavily of basil for the rest of the day (mostly because the broken stems were in the trash in the kitchen) and of course 13 didn't like the smell of the pesto at all and made his own stink about it but he ate plenty of my pesto rolls for dinner. ;)

Directions
Wash and pat dry the basil and really pack it into the cup and add your basil to a food processor. Pulse for a bit. Now add half of your olive oil and your crushed garlic. Pulse again. Add your pine nuts and the rest of your olive oil. Pulse. Add your Parmesan and pulse. Scrape down the sides of your food processor and pulse pesto until smooth. Salt and pepper to taste.

I put a little aside to use in the next week, and covered an ice cube tray with plastic wrap and filled the holes with the rest to freeze for later use.
Posted by Nicky at 9:31 PM 2 comments: